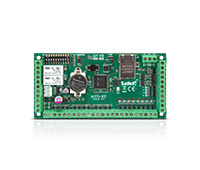 The ACCO-KP module is designed for control of a single door within the ACCO access control system. The module can also be used as a standalone device. User authorization is based on code or passive transponder (proximity card, tag, etc.).

The device is characterized by a wide range of settings, including the user rights and time schedules for each user, including special holiday schedules. Additionally, event log with more than 24,000 events is available. Non-volatile flash memory ensures security of the module settings in case of power failure. ACCO-KP is provided with a relay output for operating electromagnetic lock or another door activating device. Owing to additional inputs and outputs, the module can work in conjunction with the alarm system.

Configuration and some functions of ACCO-KP might be different due to the system, which the controller is part of. Within the ACCO system the module is programmed by means of an LCD keypad or PC computer with ACCO-SOFT-LT software installed. The PC can be connected via RS-232 port or via RS-485 bus using ACCO-USB converter. In the ACCO NET system, the controller configuration is performed using the ACCO Soft software.

To cooperate with the ACCO-NT access control panel, the controller must be in version 3.00 or newer.